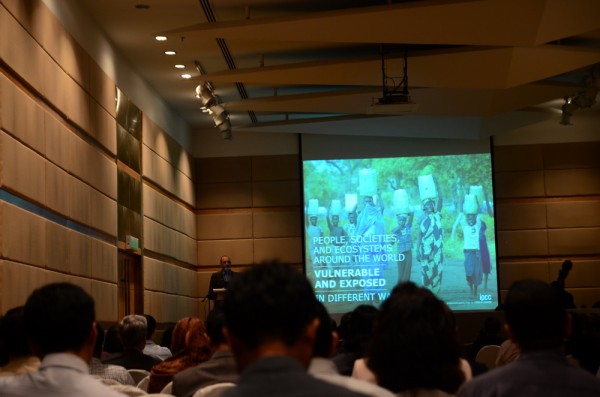 The Workshop on the IPCC AR5 was organised by the Ministry of Natural Resources and Environment Malaysia (NRE), IPCC, and Universiti Kebangsaan Malaysia’s Southeast Asia Disaster Prevention Research Initiative (SEADPRI-UKM) in partnership with the British High Commission and the United Nations Development Programme (UNDP) Malaysia.

The Workshop was organised in conjunction with a meeting of IPCC authors held in Putrajaya from 30 June – 3 July 2014 to work on the Synthesis Report that will integrate the findings of the multi-volume AR5. The Synthesis Report is due to be finalised in October 2014. The objectives of the Workshop were to: (1) highlight findings of the IPCC’s three Working Groups; (2) give special focus to topics such as forestry, sea-level change, food security and responses to climate change; and (3) examine the role of the IPCC and how its work can be improved. The Workshop was attended by experts from various ministries, institutes, departments, agencies including non-governmental agencies (NGOs), and universities.

The workshop began with remarks delivered by the IPCC Chair, Prof. Rajendra Kumar Pachauri. It was officiated by the Minister of Natural Resources and Environment, YB. Datuk Seri G. Palanivel, who was represented by Y.Bhg. Datuk Rahim Nik, Deputy Secretary-General. The Workshop programme was divided into three sessions. In Session 1, an overview of key findings was provided by the Co-Chairs from the three Working Groups of IPCC. In Session 2, three prominent scientists who were also the Coordinating Lead Authors shared their insights and perspectives on sea-level change, forestry and food security. In Session 3, an economist and a sociologist presented their perspectives on responses to climate change, and the Vice-Chair of IPCC also presented a brief history of the development of IPCC and shared his views on serving the needs of members in the future.

The key messages from the workshop on the causes and impacts of climate change were very clear, and efforts from all individuals are necessary to address the challenges. It is important that the findings of IPCC are disseminated to a wider audience to increase public awareness and preparedness to deal with the challenges. However, response from the invited participants, particularly the NGOs and local authorities, was not encouraging, and they were also not forthcoming in responding to requests to share the adaptation projects. This lack of response is particularly worrying because the local authorities and NGOs play an important role in adaptation. Another disappointment was that the media was not present at the workshop.

It is hoped that the response to the upcoming Asia-Pacific Climate Change Adaptation Forum to be held in PWTC, Kuala Lumpur from 1-3 October 2014 will be more encouraging. The theme of the Forum is New Partnerships for Resilient Development: Government, Business and Society. Without the active participation of all Malaysians, particularly the local authorities, NGOs, young researchers, and the private sector, adaptation actions in Malaysia can be expected to be particularly challenging. As the Forum draws closer, it is becoming all the more urgent to make greater efforts to create greater awareness and concern among Malaysians on the need for planned responses and adaptation to climate change.