Workshop on Monsoons and Weather Extremes

WORKSHOP ON MONSOONS AND WEATHER EXTREMES

The Asian Network on Climate Science and Technology (ANCST), supported the Workshop on Atmosphere – Ocean Interactions in the Indo-Pacific basin and their impact on Asian Climate on 25-26 November 2014, which was organized by the Divecha Centre for Climate Change, IISc Bengaluru, India. The Workshop’s conclusion was that there was need for specialist research group focusing on Asian climatic phenomena related to the oceans of South and Southeast Asia, informed by the science of the basic atmospheric-ocean interaction. Such a group could facilitate exchange of scientific information about changing climate and extreme conditions to communities and Governments.

Therefore, the Workshop on Monsoons and Weather Extremes will serve as platform to stimulate discussion on Asian climatic phenomena with respect to changing climate and extreme conditions. The aim is to chart a pathway forward for scientific collaboration. Experts from Malaysia and the region will be invited to share their knowledge and set the scene. Decision makers and researchers from MetMalaysia will be invited to provide inputs on future plans and road maps toward improved understanding on weather and climate extremes in the tropics. 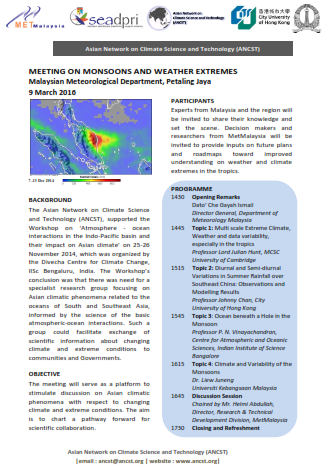